nor visual studio installed in the system. I don’t know how people before me worked on this server,

Well, then that is most of your challenge.

you do NOT mess around with trying to install this, and that, and more on the web server.

What you do is get your hands on the source code and project. You then develop on your computer the appclation. That’s where new code, new dependances, and the writnig of new code and the development process will be done.

Once you are happy with the results, then you will build and publish this new next great version of your applcation to the web server. And this “act” of publishing will have your code compile, all the .dll’s and depenances build, created for you, and that RESULT is what gets sent to the web server.

In other words, you might have 2 or 5 different web sites running on that server. Each the developer teams working on their web site applications does NOT mess around, play with, or worry about the web server. So, you need to get your developer tools, and enviorment setup. And those tools (like visual studio) are CERTAINLY not going to be placed on, or exist on some web server. The web server job is to dish out web pages – not to factality your software development process and cycle.

About the only major issue you need to determine?

They sound similar, but these two development (and deployment) models are VERY different.

But, to modify code, modify this web site?

You without question REALLY need to get a development environment setup, and this will without a doubt require you to setup and have and install Visual Studio on your computer that you plan to use for such software development.

Thus, you can modify, create, change and do standard development on that site and code base. When you are ready, happy, and have tested the working code to your liking?

Then, and only then would you compile, build and publish the resulting system to the web server. But, you certainly never have to muck around, mess around, and start installing things like .net libraries and bits and parts of your applcation. even using 3rd party library code – say ghostscript.net or whatever? That will be part of your build process, and during the publish operations, those libraries and code will be sent, published, and included with your resulting web application. As such, you should not have to do really much of anything on the web server. About the ONLY exception would be saying your web site is running .net 4.0, and you decide to use the latest .net version (4.8) for this web site?

Then you may well have to install and ensure that .net 4.8 exists on that web server, but for all of the other references, library code, and references and code the web site uses? That will be resolved at build time on your computer, and you only send the resulting “build” of the web site to the web server.

So, if you start to use say some .net library (such as the zipping one), or some other library? You are not being installing those libraries on the web server – the publish and build of your application with Visual Studio is responsible for that process.

As a result, it is really next to near impossible to modify the web site that is on the web server. The only real exception of course is if they used a web site, as opposed to a web site application . In that case, it is possible from Visual Studio to open up the web site directly (assuming your on the same network), but even then, it is not all that great of a idea to try and modify, debug, change, and test against the live web site, since we assume that users are using that site.

Visual studio does automatic install its “own” web server, so you can build, test, run and work on a copy of the web site. Once everything is working as you like, you then are able to publish your working applcation to the live web server.

If you are going to do asp.net development, then you need to have the tools designed for this purpose – any other half baked approach is just that – half baked.

Also, one question: I have tried looking into lots of project types on visual studio, but none seem to match what the server uses.

Well, you have 20+ years of Visual Studio, and boatloads of money being poured into the .net framework EACH year. So, there are a BOATLOAD of project types!!!

And some project types are VERY simular, but operate VERY different from a deployment point of view.

So, the first step is to determine if you have source code. Just like desktop development, I can provide you with the source code, or I can compile that desktop program code, and hand you the resulting applcation. In that compiled applcation, you still see a boatload of “forms” and bits and parts that make up the applcation, but the source code will of course have been stripped out.

The same goes for .net web projects. While most web systems are based around scripting languages ​​(both browser side, and server side), the key concpet here is that the server side code will have been written in c#, or vb.net (and you should find out which by the way ).

So, when such projects are to the web site, there are different approaches.

In some proejcts (depends on the type of project), then the source code IS ALSO put on the server. When an aspx page is loaded, then a corresponding page (often called code behind) is also loaded, and compiled by IIS (the web server). So this is a compile on demand load setup.

The above is normally called an asp.net web site.

but you ALSO have the case of what is called a asp.net web site applcation. (the last part “application” is a huge issue. That means Visual Stuido will build and compile the code and then you publish to the web server. That means that the vb.net/c# source code is NOT included in the web site, nor is it published, and as a result the web server IIS does not have to compile the code on demand – it already compiled BEFORE deployment!!! And these matters, since this choice will determine if you HAVE the source code on that web site , or you need to get/find/have/procure the original project used to build that web site. required project files to manage, change, or develop for that web site.

So, while there is a MASSIVE amount of project types in Visual Studio (VS), ranging from smart phone development to desktop to console applications?

Here is a simple list of only web projects – vb.net choice (and you have the same list for c# projects!!!!).

So, you need to see/check/determine if the source code was placed/published to the web server. If not, then your first step is to get your hands on the source code and project used to build that web site – without that, you quite much looking for things in a room without the lights on.

So, say you have a web page (often called a web form, but that will depend on this is a web forms project, or an even OLDER project that is classic ASP.net, which is even OLDER then web forms).

So, you might have a page called BookingExpand2.aspx. This will have the markup for the page (but, VERY important, it is server side asp.net markup. It can have plain jane HTML, but it will also have .net controls and stuff. But, for the most part, it is HTML markup, and will also have quite a bit of .net markup (say a grid view control). Then for that SAME ONE aspx page, you have a file that has the code behind (written in vb.net or c#). so called code behind page will be called:

In above, we will see/have plain jane server side code – in this example vb.net code.

So, the markup page, might have this and more: 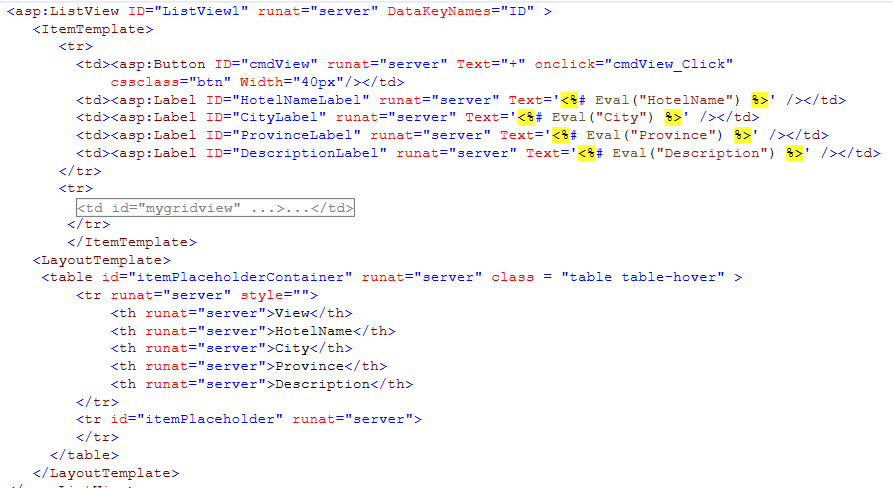 So, above is asp.net markup. It will have HTML but also have the many rich asp.net controls.

So, when I run this page, I get this: 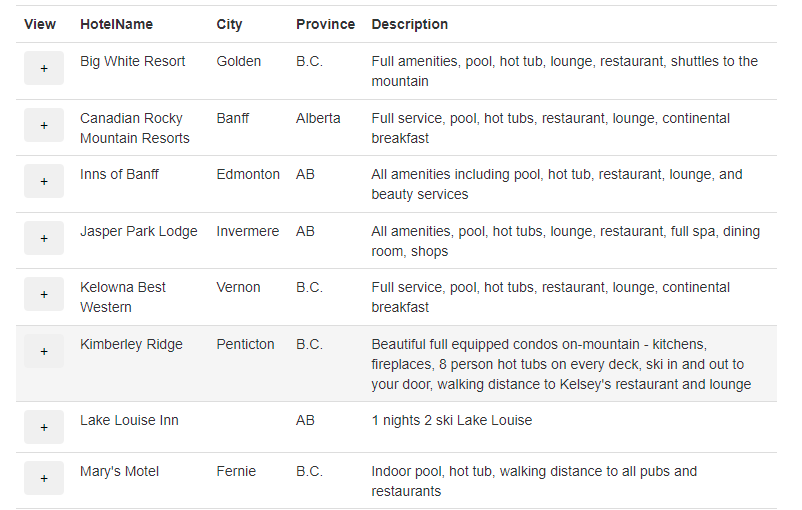 So, that page has bootstarp, uses the classes from bootstrap, and the page also has jQuery, and other bits and parts – quite much like most web pages and systems. But, the code and events for the page don’t have to client side, nor do they have to have JavaScript.

So, in above, there is a button to expand the row – show people booked in that room. That code is a button click, and is server side code. 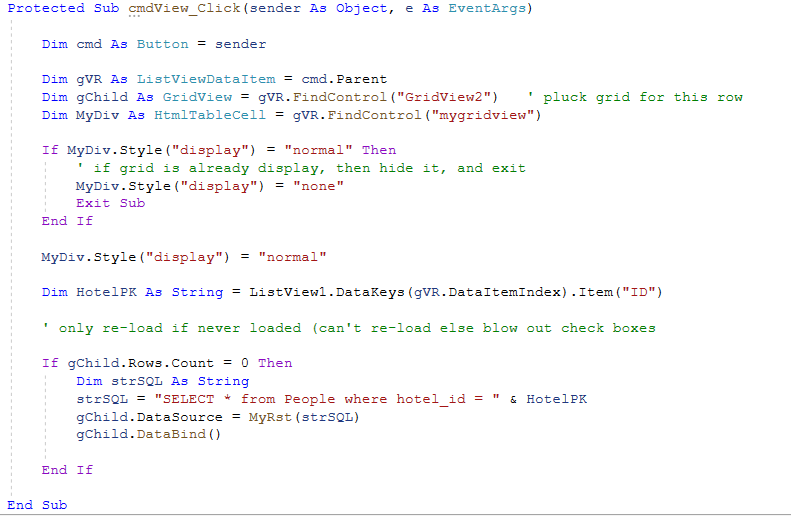 And now we see this: 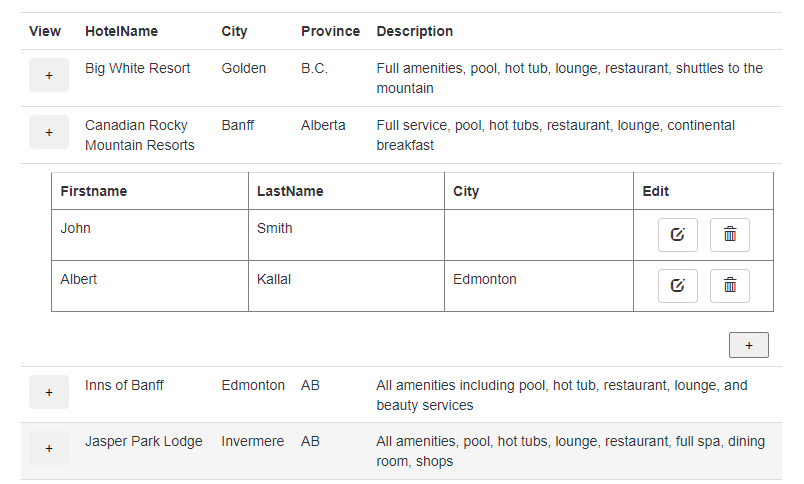 So, note for above, there was no client side script written here. It just a button, with an event click, and when clicked on, it runs the button click code. This is not un-like working with desktop ms-access, or even VB desktop programs. So controls are dragged + dropped into the page, and then server side (vb.net or c#) code is written for those controls.

And as per your other question – no, these older projects do not have nor use cshtml files.