As your applications grow and become more complex, so can your worries about the risks to your environments and ensuring they comply with your system policies and regulatory standards. While administrators deal with audits and other routine work, they also need to work on planned projects.

DevSecOps Teams could manage their endpoints with existing tools for small fleets of devices, but challenges arise when you begin to scale. This is where Chef InSpec comes into the picture.

Chef InSpec is a security and compliance testing tool that can help you address these concerns by providing an easy–to–understand (human-readable) and customizable code framework. InSpec helps define expectations for the systems you manage and detect any deviation from your set policies. It’s easy to get started because InSpec does not require an agent to work with Linux, Windows, or macOS target nodes to scan and verify configurations.

It also provides a great amount of flexibility in how you go about that detection process. For ad hoc point-in-time scans, the InSpec command-line utility allows you to evaluate any system reachable over SSH or WinRM. InSpec can also be used with Chef Automate to scan thousands of nodes at once in on-prem, cloud, and edge environments.

Chef InSpec DSL provides a broad set of resources and matchers that allow you to write easily readable code without having any knowledge of the underlying Ruby language.

InSpec tests and more sophisticated profiles let you describe a system resource and make statements about how that resource should behave or be configured. InSpec includes nearly 500 built-in resources, and you can combine them to make your own custom resources. Resources declare a resource type and then provide information about that system object. The following example looks at a file resource type, providing the path to the specific file on the system to be analyzed, confirming that it exists and contains the content you want.

The following example tells InSpec to look at a specific file on a target node and confirms that it contains “Hello, world!”:

Setting up your Environment

The best way to get started with InSpec is to install Chef Workstation, a collection of tools that enable you to create, test, and run Chef code.

You can install Chef Workstation by downloading an OS-specific installer for Windows, Linux, or macOS.

You can find details about how to set up Workstation, Chef Infra Server, and Chef Automate in this getting-started document.

You can use Chef InSpec to scan for files, applications, open ports, and many other resources configured on Linux, Windows, or macOS. The following example determines if auditd is installed on a Linux system using an InSpec profile.

Profiles are made up of controls, which bundle one or more InSpec resources into blocks that define one or more expectations for your target systems. It also allows you to add logic about how, when, and where your tests run.

Chef has built-in generators to create profiles and other Chef content, including cookbooks, files, and templates. For InSpec, a simple command generates a profile folder, a controls sub-directory that holds the actual InSpec code, and an inspec.yml file that contains metadata about your profile, including its name and version.

Run the following command to generate a profile:

The results are as follows: 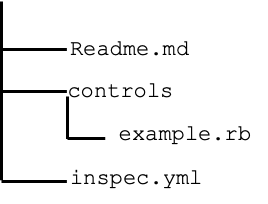 The inspec.yml file contains the title, maintainer, copyright name, copyright email, and summary of the profile. This information provides metadata used to identify the InSpec profile, helping you to keep track of different profiles and versions when using both the command line and Chef Automate, the graphical Chef dashboard.

When you run the inspec command, it caches all the dependencies needed for your tests and stores them in an auto-generated “inspec. lock” file.

Example of a Control

Open the/auditd/controls/example.rb” file in your favorite code editor and add the following code. This InSpec profile tests your systems and, like the simple example above, includes additional information about the actions you want to be taken:

If all the given criteria are met, you’ll see results in the terminal or in the Automate UI.

In addition to tests, every control includes its impact weighted value from 0.0 to 1.0 to describe its criticality. Most InSpec profiles consist of many controls, which allow you to categorize results as minor (0.0 – 0.3), major (0.4 – 0.6), or critical (0.7 – 1.0). Controls also contain titles and descriptions to help you and your teams understand what the profile is doing. You can also add tags for even more searchable metadata.

InSpec works over SSH and WinRM scanning Linux, Windows system, and macOS. No Chef Infra client agent is required on your target systems, but you should have SSH users and passwords set up to interact with Linux and macOS systems. Windows systems must have WinRM enabled with permission granted to an authorized user.

Using the InSpec Code on a Target Node

You can run ad hoc Chef InSpec profiles against any target node reachable by your workstation. You can also set up Scan Jobs in Chef Automate to run profiles against hundreds or thousands of nodes all at once.

To run a simple ad hoc scan from your workstation, use the following syntax:

To target Windows, use the following syntax:

You can use the code from the Chef Supermarket to check for multiple scenarios, such as verifying a package has been installed on Linux OS, log data has been written to disk, a percentage of disk space is available, and more. You can use these profiles without having to manually download them. Just use the following command, which applies the dev-sec/linux-baseline to your target node and shows you the results:

In addition to using the profiles available in the Chef Supermarket, you can apply InSpec content directly from GitHub repos. The above dev-sec/linux-baseline could be run this way:

Using publicly available profiles like this is an effective way to quickly get started with Chef InSpec without having to write your own code or manually download anything.

A scan job is an equivalent of running inspec exec against a given set of targets. The results of a scan job are sent to compliance reporting, and any profiles installed in your namespace may be used in a scan job.

Once you have Chef Automate and have a node or VM you want to audit, your initiative a compliance scan with a few basic steps. Start with one or more InSpec profiles that define the security or compliance standard you’d like to validate as code. You can create your custom profiles based on your organization’s unique requirements, or you can take advantage of more than 500 pre-built profiles available through the Chef Automate Compliance dashboard.

For example, if you want to use a CIS (Center for Internet Security) security benchmark for Ubuntu, just search for the OS, select the profile you want, and click the Get button to download that profile to your Automate server, where it can be used for your node scans. 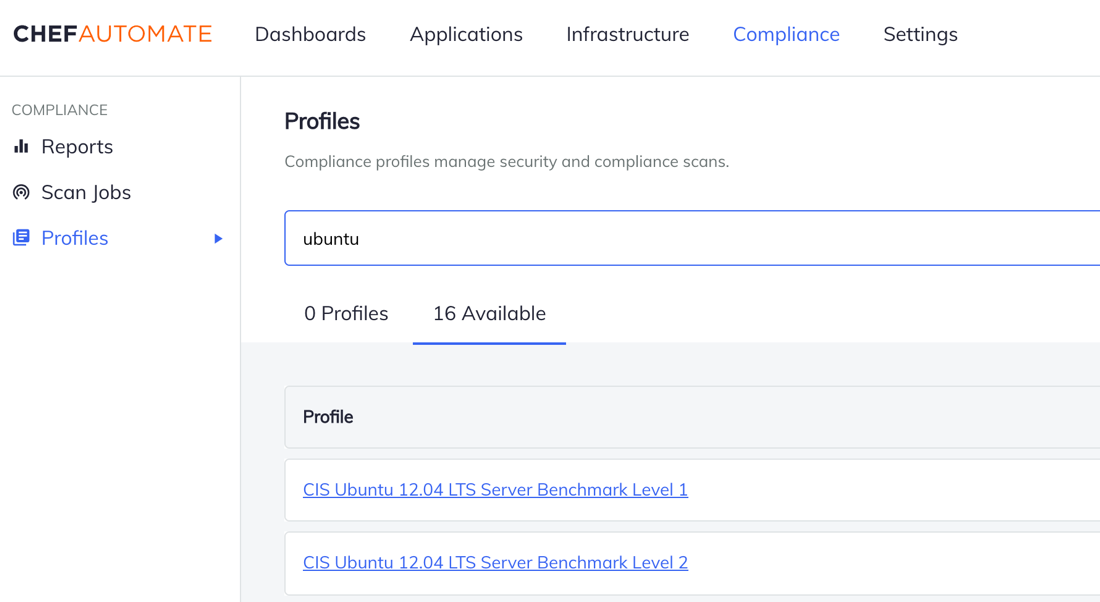 Scan jobs created in Chef Automate can be set to run once or on a schedule, enabling you to confirm node compliance over time without any human interaction.

An InSpec control for checking if port listening on 443:

A. The first control should only be run if the system being evaluated is running Windows.

B. Check if the super user exists for the given operating systems.

An InSpec profile control to confirm the AWS user:

This document explains what Chef InSpec is and how to verify your recipes and node configurations using InSpec tests and profiles. InSpec provides a powerful way to verify the security and compliance of your systems, regardless of OS, and without any agent.