If you are already familiar with other SQL databases but new to PostgreSQL, then this article is perfect for you. It will help you understand the nuances and get started with PostgreSQL.

Note: Most comparisons in this article are targeted towards MySQL since it is the closest open source database that PostgreSQL can be compared against.

No Default Ordering on Primary Key

If you have previously worked with MySQL, then you should be familiar with the fact that the primary key of any table is a clustered key by default. The data is physically ordered on the disk using the index, and this is why when querying a primary key in MySQL, the data is sorted without having order by in the query.

Let’s test our theory with some experiments by running the query below: 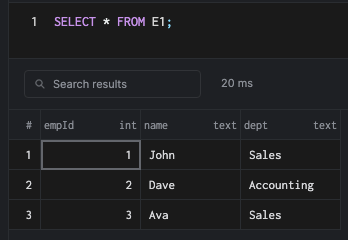 As you can see, we didn’t include an order by clause in our query, but MySQL still returns rows in the same order.

Let’s run the same set of queries in PostgreSQLonly on a table with a Primary Key:

If we run a query like SELECT * (see below), PostgreSQL will not sort data by empId – we must include an ORDER BY clause instead. 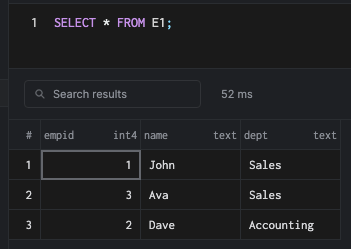 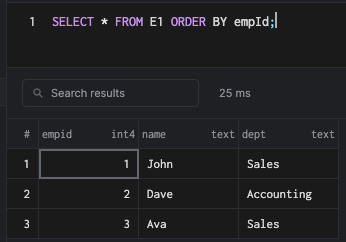 Clustered keys have their own advantages and disadvantages, but there is no default clustered key in PostgreSQL. PostgreSQL gives you the choice to do clustering if required, though.

PostgreSQL has default ACID compliance settings which are very different and stricter in nature. Some of them are as follows:

PostgreSQL has stricter ACID compliance by default. For example, MySQL has an isolation level (Read Uncommitted) which allows dirty reads to happen, whereas, in PostgreSQL, there is no version/level where dirty reading is allowed.

To accomplish the serializable isolation level (strongest level), PostgreSQL uses something called memory-based MVCC. This is much faster and generally does not require explicit locks to achieve a serializable level. In comparison, MySQL achieves it with fine-grained locks. In most cases, there is no performance difference, but it has been argued that memory-based MVCC is slightly better and prevents bloat in the main table.

PostgreSQL follows process-based concurrency, and hence, opening and closing of connections are not encouraging. This is also the case with many other database systems, but more so in PostgreSQL. Therefore, it is recommended to use a connection pool that maintains connections for a longer period, and applications can then open and close connections via this connection pool.

PostgreSQL Is Not a Single Model Database

Users of PostgreSQL should also note that PostgreSQL is not a single model database. It seamlessly integrates other database patterns/types into the relational model of operation. A lot has been written on this, so I will just link the articles here.

These data types also have their own unique index types for faster access. Unlike MySQL, which has different engines, PostgreSQL works using the same engine, and only the datatypes and index types differ.

In PostgreSQL, a database is completely separated from other databases. It is a good practice to keep only one database in a PostgreSQL cluster. If there is a need to logically group tables, then that is where the schema comes in.

These points are important to understand, especially for someone coming from a database like MySQL, where these terminologies are reversed.

Each database out there has its own SQL dialect for many reasons. PostgreSQL has its own dialect, which is very close to the ANSI SQL standard. The SQL glossary is listed in the documentation here.

Open source and community-owned are two very different things. Open source depicts the license of the software, such as

And community-owned means the direction of the evolution and development and enhancement is decided by a volunteer community. A community-owned open source software is much better than an organization-owned open-source software since no company dictates the future of the project. PostgreSQL has a license that is similar to BSD or MIT and is much more permissible than GPL (MySQL License.) For all practical use cases, one does not need to worry about the license of PostgreSQL for most of their work.

There are not many relational databases that satisfy all three of the following commandments:

To me, this is one of the greatest strengths of the PostgreSQL database.

And a lot more. It is important to understand how any features you’ve decided to employ will impact your database infrastructure as a whole, as database management systems have been developed for a wide variety of use cases. Avoid comparing features just for the sake of comparing, though – these database management systems existed for ages, new features are getting added very frequently, and the roadmap is changing rapidly.

As far as PostgreSQL is concerned, keep in mind that while it has its own drawbacks, it’s considered one of the most advanced open-source database management systems available for use today. It is our responsibility as software engineers to understand all of the tradeoffs posed by the database management system and make sound decisions. We hope that this article has given you some more insight on what’s available in PostgreSQL and thereby allowing you to make informed decisions.