Today, distributed databases lead the market, but time synchronization in distributed systems remains a hard nut to crack. Due to the clock skew, the time in different nodes of a distributed database cannot be synchronized perfectly. Many computer scientists have proposed solutions such as the logic clock by Leslie Lamport (the 2013 Turing Award winner), the hybrid logical clock, and TrueTime.

In this post, I will introduce TiDB’s TSO, how it delivers time services, and its strengths and downsides.

TiDB is an open-source distributed database with horizontal scalability, strong consistency, and high availability. It consists of multiple components, including the PD cluster, TiDB cluster, storage cluster, and TiSpark. These components communicate with each other and form a complete TiDB system.


PD is “the brain” of the entire TiDB database and also the focus of our topic today. It has three major tasks. It:

The PD cluster usually consists of multiple PD instances (three instances in most cases), and the PD Leader among those instances delivers external services. An etcd store is embedded in the PD cluster to guarantee PD’s availability and improve its ability to store metadata. 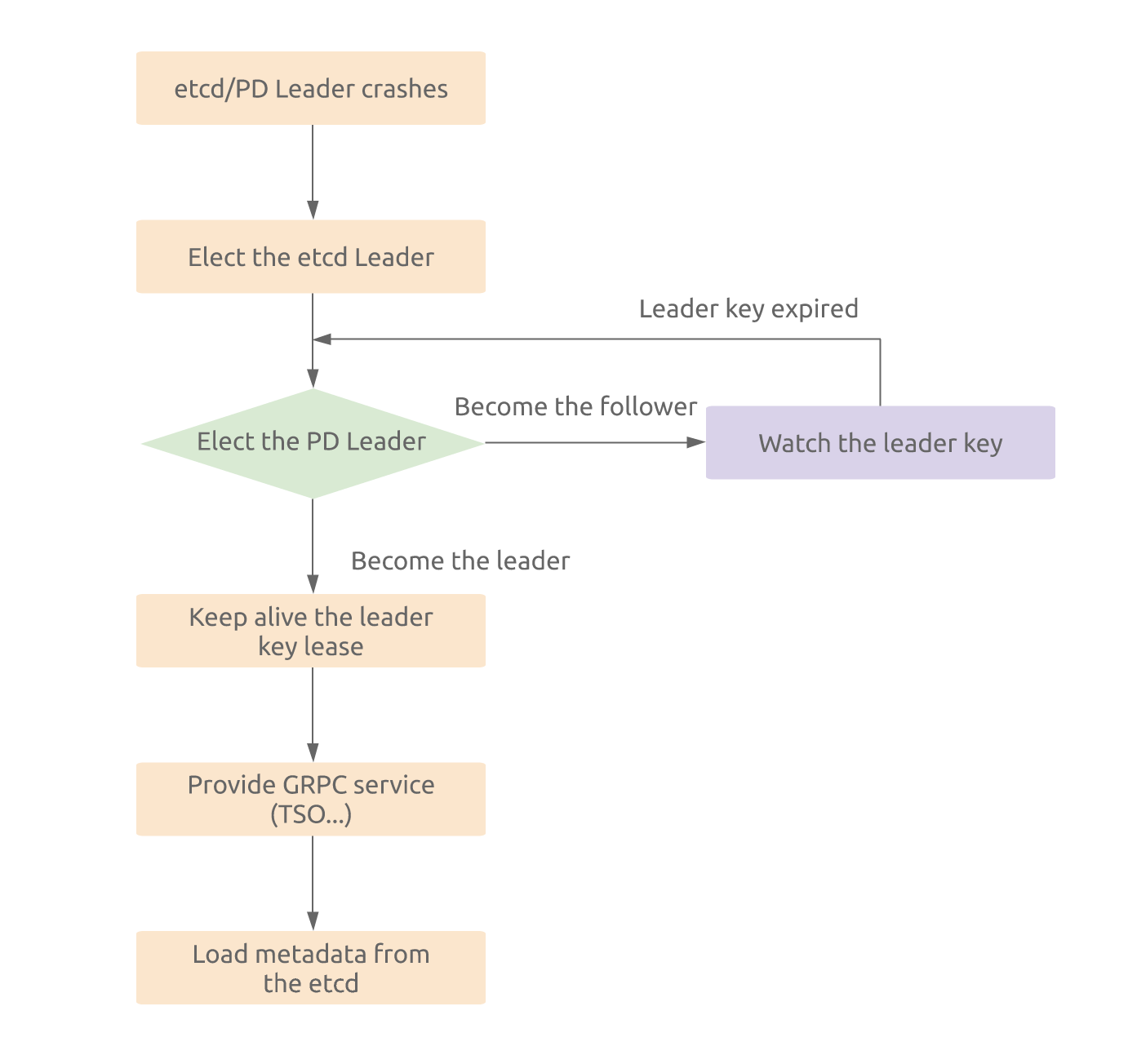 Next, I will introduce how TSO in the PD server comes into play. This section will describe how PD calibrates, delivers, and fast-forwards the time.

When a new PD leader is elected, it does not know the current system time. So its top priority is to calibrate the time.

Then, the new PD Leader compares TLAST and TNOW, the local physical time:

After the new PD Leader finishes these steps, the time calibration is done.

After it finishes the time calibration, the new PD Leader starts to deliver TSO services. To ensure that the next elected PD Leader can successfully calibrate the time after the current PD Leader is down, the current PD leader should store TLAST in the etcd every time after it delivers the time services. But, if the PD Leader did so every time, PD’s performance would be severed. Therefore, to avoid such problems, the PD Leader pre-applies for an assignable time window, Tx. Its default value is 3.

It first stores TLAST, which is equal to TNEXT + Txin the etcd, and then allocates all timestamps during the time period [TNEXT, TNEXT + Tx) in memory.

Preallocation fixes the problem of loss of PD performance caused by frequent operations in the etcd store. However, the flaw is that if the PD Leader crashes, many pre-allocated timestamps would be wasted.

When the client side requests a TSO service, a 64-bit hybrid logical timestamp is returned. Its physical time value is the calibrated TLAST, and its logical clock value increments atomically with the request. If its logical clock value exceeds its maximum value (1 << 18), it sleeps for 50 ms to wait for the physical time to be fast-forwarded. After the physical time fast-forwards, if there are still timestamps to be allocated, the PD Leader continues to allocate them.

During the time services, PD can only allocate timestamps through the increment of the logical time. When the incremented value reaches its top limit, timestamps cannot be allocated anymore, and the physical time needs to be fast-forwarded.

When TLAST – TNEXT <= 1 ms, it means that the previously applied time window has been used up, and the next time window needs to be applied. So, the PD Leader stores TLAST (which is equal to TNEXT + Tx) into the etcd and continues to allocate timestamps during the new time window.

Pros and Cons of TSO

TiDB adopts TSO, a centralized clock solution, which is essentially a hybrid logic clock as well. As the centralized clock delivers single-point time services, all the events are ordered. It is also pretty simple to implement. It also has the following downsides; fortunately, most of them have a corresponding solution: