In my previous blog that introduces Apache BookKeeper, it mentions that Apache Pulsar maintains a cursor ledger for each subscription in Apache BookKeeper. After a consumer has processed a message with an acknowledgment sent to the broker and the broker has received it, the broker updates the cursor ledger accordingly. In this blog, let’s take a closer look at the cursor, how it works, and some concepts related to it.

Ensuring messages can be consumed successfully represents a key part of any distributed message system. In exceptions, such as machine failures on either the client side or server side, a message system featuring strong fault tolerance makes sure that no messages are lost or reconsumed. To provide such capability, message systems need a precise tracking mechanism for message consumption and acknowledgment. Apache Pulsar uses cursors for that purpose.

As we can tell from the name, the word “cursor” means the blinking vertical line that moves on a computer screen as you type. It shows you the position on the screen where new text will be added. Similarly, a cursor in Pulsar tells the broker the progress of message consumption.

In Pulsar, each subscription in a topic has a cursor bound to it. Depending on the subscription type adopted, the cursor tracks the consumption and acknowledgment information of one or multiple consumers. For example, consumers share the cursor for a shared or key_shared subscription. A Pulsar subscription is similar to a Kafka consumer group, while a cursor is like an offset in Kafka (Kafka uses a numerical offset to track the position of a consumer). That said, the cursor works in a much more sophisticated way than the offset.

Note that as it is possible that each topic has more than one subscription, you can create multiple subscriptions of different types for that topic. This also means multiple consumer groups can read messages on the same topic. In this case, the cursor of each subscription records the message consumption position of consumers in the respective group, not impacting one another.

After we learn these subscription types, let’s take a look at how the cursor works. See the figure below for a simple example.

As brokers are stateless and cursors are stateful, Pulsar stores the consumption position information in BookKeeper. When a broker receives an acknowledgment from a consumer, it updates the cursor ledger for the subscription that the consumer is bound to. In the case of consumer failures, the message consumption and acknowledgment information is still safe and no messages will be reconsumed when consumption restarts. This is because the cursor ledger data are safely stored on books based on the replica strategy configured (ie the values ​​of Ensemble Size, Write Quorum, and Ack Quorum).

Note: A small portion of cursor metadata is stored in ZooKeeper instead of BookKeeper, such as cursorLedger index information. The reason is that as the number of topics and consumers grow, the cursor metadata size becomes extremely large, leaving ZooKeeper overwhelmed and affecting the performance of the entire Pulsar cluster.

So, after consumers acknowledge one or multiple messages in a topic, does the cursor move for sure? And how many spots (messages) does the broker move the cursor? To answer these two questions, we must first know how messages are acknowledged in Pulsar.

How Messages Are Acknowledged

By default, each message in Pulsar needs to be acknowledged (ACK for short). Currently, Pulsar supports two ways of acknowledgments — individual and cumulative.

Note: You can check the details of a topic by using the pulsar-admin topics stats command, the output of which contains cursor-related information, such as markDeletePosition, cursorLedgerand individuallyDeletedMessages. For more information, see the Pulsar documentation.

To summarize, whether the broker moves the cursor is related to the markDeletePosition attribute. The message marked by markDeletePosition and all messages before it are already consumed and acknowledged successfully. Note that as the consumption position marked by a cursor is only applicable to the subscription that the cursor is associated with, it is possible that multiple subscription cursors are in different positions on a topic. See the figure below as an example. 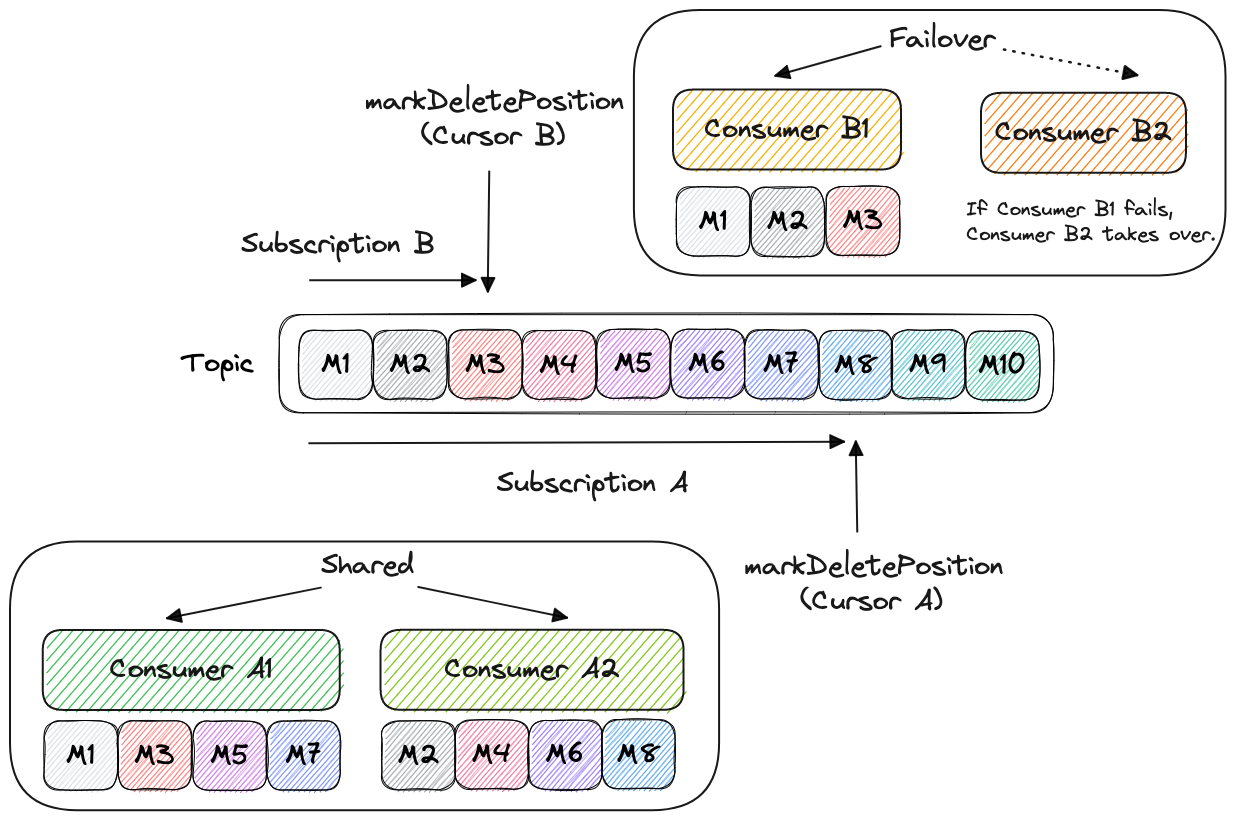 By setting a TTL policy, we can define the retention period for unacknowledged messages. After the configured timeframe, Pulsar automatically acknowledges these messages, forcing the cursor to be moved. This also means these messages are ready to be deleted.

Note: This blog does not explain TTL in detail, as it relates to message retention and deletion policies in Pulsar, which is another complicated topic that requires a separate blog for detailed discussions. Here, you only need to know we still have another way to acknowledge messages to move the cursor if messages cannot be acknowledged by the consumer. For more information about TTL, see Message retention and expiry.

This blog introduces the concept of the cursor and how it works. To get a clear picture of the cursor, we also talk about different subscription types in Pulsar and two ways of message acknowledgments. The cursor mechanism not only ensures the accuracy of message consumption and acknowledgment for the distributed message system, but also provides the ability of fault tolerance. Even if the client goes wrong, the cursor ensures that messages are not consumed repeatedly and that no messages are missed after consumption restarts.